Christmas Lights at the Nietzer's > Knowledge Base > Star Project

My first project is rather ambitious. Having purchased one of the “stuff boxes” at Holiday Coro with some 30 pixel strips, I needed to come up with some projects to use them. Most people use these strips for outlining, megatrees, arches, etc. But I have so many that I wanted to be able to make smaller objects out of them. Doing so requires a LOT of soldering and care to achieve the desired look.

To make the frame for the star, I picked up some clearance Aluminum 3/4″ x 1/8″ x 8′ flat bar purchased at Lowes. I needed 4 pieces of this to build the star. Using brazing rods and a propane torch, I slowly put together the star’s frame. It was actually fairly easy to assemble the star, minus only having a hack saw to cut the aluminum. It took me about a week, working in short spurts to assemble the frame.

When measuring and putting together the aluminum frame for the star, it was important to have a plan as to how the pixel strip would eventually be laid out. This is because each “pixel” is approximately 4 inches long. I started making the ‘inner’ star without fully measuring the strip. This is why some of the rows are 4 pixels long while others are 3. This actually is not a problem as it makes a good point on these.

Having cut all of the pixel strip to the right pieces (it took right under 2 rolls from that stuff box, cutting out the bad pixels), I started assembling the star. I followed the idea of using a glue gun to seal the ends of the strip. After doing so, I would run a few pieces of shrink tubing where the wire and strip came together to add some extra weatherproofing and strength. I used double sided outdoor adhesive tape and zip ties to keep the pixel strip in place. From what I have completed so far, the star looks AWESOME. It is a little more than 5 feet tie and about 2.5 feet wide. Check out some pictures of my project. 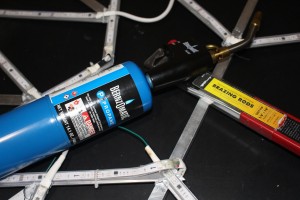 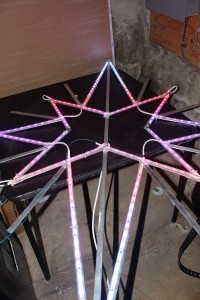 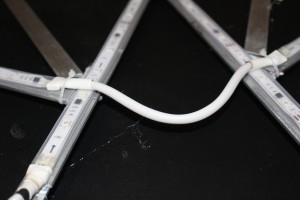 running wire so that it does not block LED’s 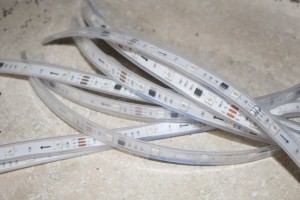 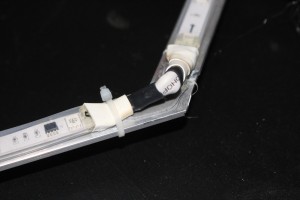 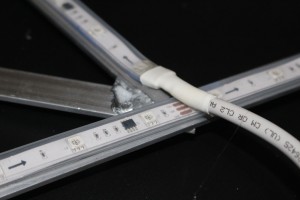